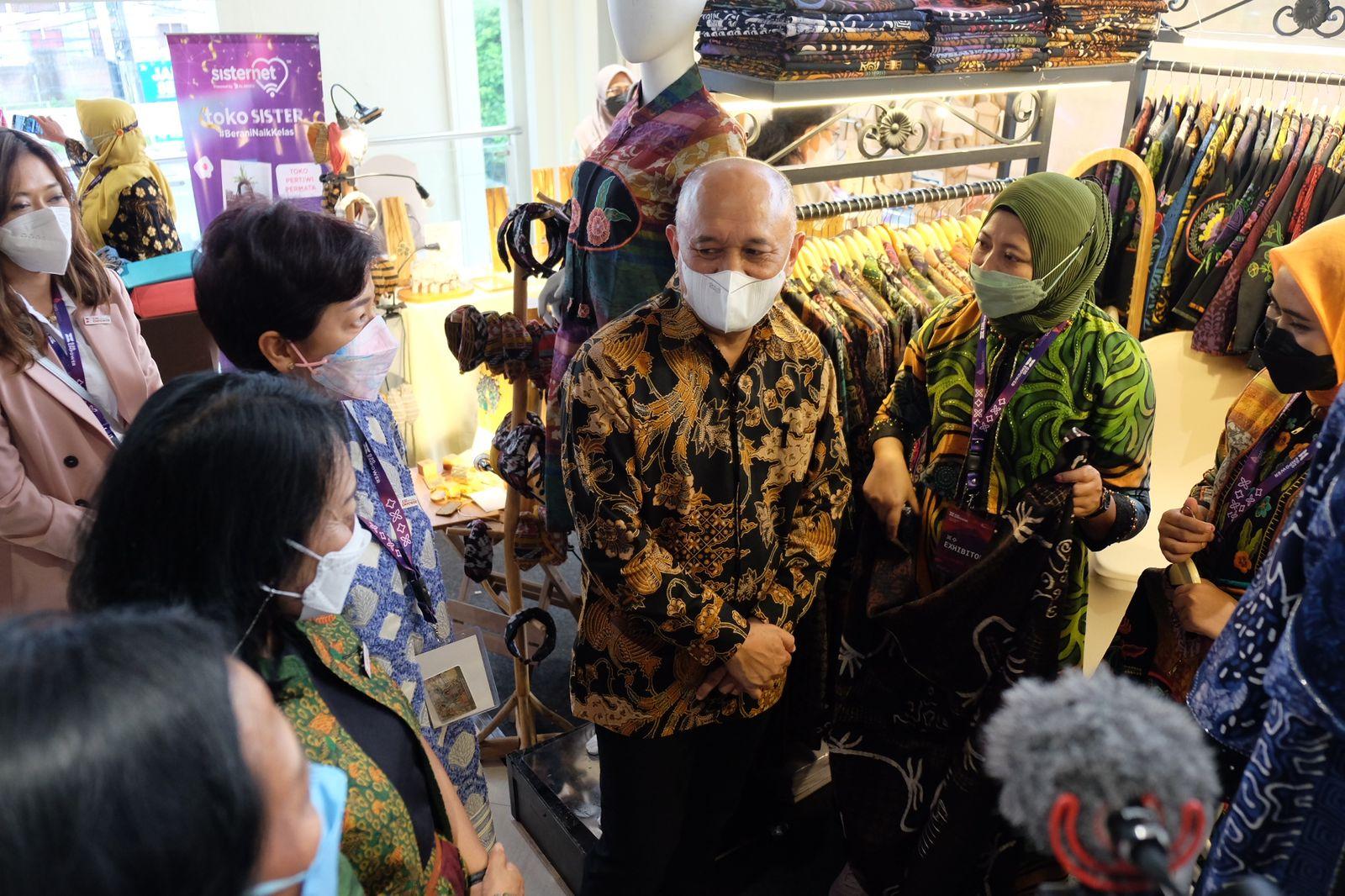 Jakarta, 20 May 2022. Four ministries have lent their support to efforts to improve the ability of Micro, Small and Medium Enterprises (MSMEs) and the implementation of gender equality. Four ministers, namely the Minister of Women's Empowerment and Child Protection (PPPA), the Minister of Cooperatives and SMEs, the Minister of Tourism and Creative Economy, and the Minister of State-Owned Enterprises, agreed at the G20 EMPOWER meeting in Yogyakarta on Wednesday (18/05), that the contribution of MSMEs to the country's economy during the pandemic and post-pandemic recovery period is very large. For this reason, they are committed to supporting the strengthening of MSMEs through various programs in each ministry.

MSMEs have been shown to contribute up to 40% of national income in developing nations and to absorb a large number of workers, according to PPPA Minister Bintang Puspayoga.

"Data from the World Bank shows that MSMEs represent around 90% of businesses and more than 50% of employment worldwide. MSME development is a high priority for many countries around the world as they can contribute up to 40% of national income in developing countries. Women in low- and middle-income countries also have a relatively larger share of small businesses compared to large companies. Many of them run day-to-day businesses and are self-employed."

According to Minister Bintang, MSMEs managed by women are the most affected by the Covid-19 pandemic. Citing McKinsey (2020) data, globally, based on an analysis of several small business surveys, it shows that before taking into account intervention, 1.4 million to 2.1 million MSMEs could close permanently in the first four months of the pandemic. In Indonesia, women own and operate about 50% of the approximately 65.4 million Micro, Small and Medium Enterprises (MSMEs) across the country. However, according to a survey done by the Central Statistics Agency in 2020, two-thirds of MSME owners saw a decrease in income as a result of the pandemic. Over 45 percent of MSMEs are in debt and have difficulty paying their payments.

The Indonesian government is strongly committed to paying great attention to MSMEs managed by women, not only to survive, but also to grow and become stronger. One of the most successful initiatives for women's empowerment is gender perspective entrepreneurship training. The Ministry of Women's Empowerment and Child Protection (Kemen PPPA) collaborates with the private sector to support women entrepreneurs with digital training. In addition, women in the home industry received digital and business literacy training, including digital and financial literacy, operational skills, and market access.

In order to strengthen these women's MSMEs, Bintang added, the Indonesian government has announced the National Strategy for Women's Financial Inclusion, which is recognized by The Asian Development Bank (ADB) as the first and only one in the world. This strategy aims to fill the gap by introducing key priority areas and action plans to promote access to finance for Indonesian women, accommodating their diverse needs, interests and backgrounds.

In the spirit of poverty alleviation, the Mekaar program, a f financing plan for women's micro and ultra-micro companies, was also launched in partnership with the Ministry of SOEs. Furthermore, the Ministry of PPPA also issued several regulations to support women's MSMEs, not only to grow but also to shift their businesses from informal to formal, as well as significantly increasing the number of entrepreneurs and ensuring the availability of various facilities to support businesses.

The PPPA Ministry is also actively encouraging women at the grass root level to become skilled and courageous figures in entrepreneurship. Efforts to increase the number of women entrepreneurs and women MSMEs at the village level are carried out through the Women and Child Friendly Village Model (DRPPA). This program has been initiated since 2021. In 2022 the Ministry of PPPA targets the formation of 142 DRPPAs in 33 provinces. The main focus of women entrepreneurs is for women who are heads of families, especially for women who have been abandoned by their husbands due to the Covid19 pandemic, women who have survived disasters and women who have survived violence. This is one of the indicators of the DRPPA.

Meanwhile, Teten Masduki, the Minister of Cooperatives and SMEs, remarked, "According to data, the pandemic has disproportionately affected women businesses, with 76 percent of them working from home. MSMEs account for 60% of national income in Indonesia, with women owning 64 percent of the 64 million MSMEs. As a result, as the world tries to recover from the epidemic and lessen the impact on enterprises, particularly the recovery of businesses owned and led by women."

The Ministry of Cooperatives and SMEs (KemenKopUKM), continued Minister Teten, in March 2022 held a Seminar on Empowering Women Entrepreneurs Through Inclusive Business as a side event of the G20, adopting three forward-looking policy recommendations that can strengthen commitment to gender equality action and empowering women in rebuilding productivity. women, especially in SMEs that are owned and led by women.

“The first recommendation, the importance of increasing cooperation between the government, the private sector, and investors to support women entrepreneurs. Second, encourage policies in the field of finance and infrastructure that are gender sensitive and provide access to funding and legality. Third, increasing the financial digital literacy program for women entrepreneurs to increase investment readiness," said Minister Teten.

Sandiaga Uno, the Minister of Tourism and Creative Economy, stated that the tourism recovery and creative economy budget will be used for the main activities of national tourism recovery such as micro-digital training, Clean-Health-Safety-Environment Sustainability (CHSE) training and certification, and microfinance for MSMEs and Tourism Village.

"The Ministry of Tourism and Creative Economy has several strategies to rebuild women's productivity after the pandemic. First, take steps to address the gender pay gap in tourism. Second, encourage entrepreneurship. Third, promote education and training through training programs for women in tourism. Fourth, placing gender at the core of tourism policies and business practices. Fifth, empowering women's participation in community and civil society," Sandiaga explained.

Meanwhile, the Minister of SOEs, Erick Thohir, raised his ministry's commitment to implementing gender equality by, among other things, providing a sense of security, comfort, and opening up wide opportunities for women in SOEs. Included in these efforts are creating a work environment that is free from discrimination and gender-based violence, implementing equal rights and opportunities for career development.

Erick Thohir emphasized, "Our commitment in BUMN is reflected in several affirmative action policies, one of which is by setting a target of 15% female leadership in BUMN by 2021. This goal has been met, thank goodness. In the future, we plan to increase our female leadership target to 25% by 2023. The purpose is to highlight female professionals in BUMN who deliver outstanding achievements."

Respectful workplace policy has become one of the focuses of SOEs under the leadership of Erick Tohir. The goal is to create a work environment for BUMN that is free of violence, discrimination and harassment in order to create an environment that is inclusive and respects differences, including gender equality.

Chair G20 EMPOWER who is also the Director & Chief Strategic Transformation & IT Officer of XL Axiata, Yessie D. Yosetya on the same occasion said that more than 50% of women entrepreneurs or traders experienced a very large decline in demand. This shows an indication that leads to the vulnerability of businesses run by women entrepreneurs. One of the contributing factors is the limited capital reserves when income is low.

Summarizing various recommendations from the speakers who attended, the Co-Chair G20 EMPOWER who served as COO as well as one of the owners of PT. Infinite Berkah Energi & WKU for Research, Development and Employment IWAPI, Rina Prihatiningsih said, “In the meeting, we discussed several important points for the development of women in MSMEs. The first is a presentation from the OECD on women's trends in entrepreneurship and how the government can strengthen women in MSME policies. Second, a presentation from Grab Indonesia was delivered by Neneng Gunadi about the importance of private support and G20 collaboration for women in MSMEs. The third was a presentation from our Knowledge Partner, BCG Jakarta, which covered the trends, challenges, and support needed from stakeholders as well as a strategy for measuring progress from private action such as that carried out by Sinarmas as one of more than 60 companies that have committed themselves as advocates. G20 Empower Indonesia in the acceleration and development of women in MSMEs”. The theme of the discussion on "collaborative ecosystem" strengthening of Women's MSMEs is indeed one of the main focuses at the G20 EMPOWER meeting in Yogyakarta according to the theme of recovering together, recovering stronger.

XL Axiata's CEO talks about how she strengthen Women's MSMEs

As one of the supporters of G20 EMPOWER, XL Axiata is committed to promoting the importance of the role and leadership of women-owned SMEs in the world of work and business. On the second day of the meeting at the same forum, the President Director & CEO of PT XL Axiata Tbk (XL Axiata) who is also the Co-Chair of W20, Dian Siswarini shared her experience in supporting the strengthening of MSME Women through the Sisternet program to open up women's access to the digital economy sector.

“We understand that many MSMEs have closed their businesses due to limited access to capital. Therefore, we provide venture capital for those who have completed our sisternet incubation class to support them on a business scale. This is very important to support women-owned SMEs to advance their business, improve their family's economy, and contribute to national economic growth. With our best practices above, through education, digital, technology and access to finance, I believe that we can support women's socio-economic well-being and drive Indonesia's economic growth,” said Dian.

Through the Sisternet app, MSME women can learn from inspiring articles on the platform, join online classes, and access modules from experts across the country. Sisternet currently has over 200,000 female MSMEs in active participation.

In 2020, Sisternet together with the Ministry of Women's Empowerment and Child Protection launched a scale-up business incubation program called Sispreneur. This program aims to encourage ideas and innovations to encourage MSMEs owned by women to be part of digital economic growth. More than 1,000 MSMEs access intensive assistance in this education program.